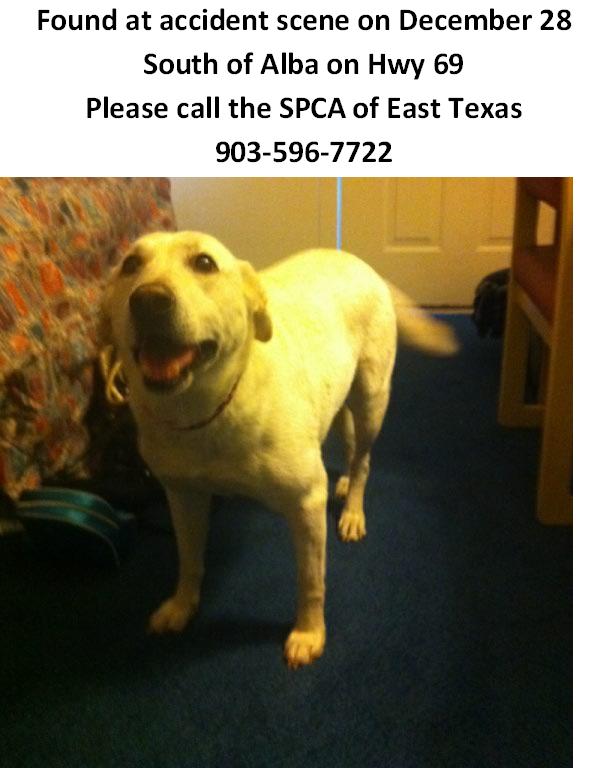 The SPCA of East Texas is searching the Alba area for the owner of a lab that was found last week near the scene of a three-vehicle crash on HWY 69.

Family members of Margaret Miller, who died in the wreck, went to the scene of the accident last week to find their family dogs and found the lab with injuries, believed to be experienced in the wreck. The family then handed the dog to Tyler animal control, which then contacted the SPCA.

Margaret Miller’s family did locate one of their dogs, but not the other.

The SPCA of East Texas has contacted the families of all victims in the crash and has not found the owner of the lab that the SPCA has named Maggie.

“We also have gone door to door in the Alba area looking for the owner and have had no luck,” said Becky Jinright of the SPCA.

It is believed Maggie could have been wandering near the accident when it occurred.

“Maggie did sustain injuries from the wreck and may have been hit with debris from a location nearby,” said Jinright.

Maggie has been cared for by the SPCA and according to Jinright, the dog is a healthy family pet.

“You can tell she is someone’s pet,” said Jinright.” Maggie whines a lot and she misses her owner.”

If you have any information on the dog’s owners contact the SPCA of East Texas.